First, I do not do holidays!

That said, I was fortunate enough to recently spend 2 weeks totally outside my comfort zone.

Not in a business context – although there are a huge number of lessons to be learnt, I am sure – but on a “working” holiday with my brother in Indonesia.

Now, this was not your typical package break – flights, accommodation and itinerary all planned for you.  This was the trip of a lifetime to 4 Indonesian cities on 3 (of its 8000 odd inhabited) islands:

Since my brother used to run a number of businesses out there he still stays in touch with a surprisingly extensive and diverse network of friends and work colleagues.  This meant we were able to do things that you would never experience as a “normal” tourist.

So, this comfort zone business …

Yes – we experienced getting yourself around in big and hugely busy cities – both by car and the ubiquitous motor bikes.  (Population is north of 250 million and there are estimated to be nearly 100 million motor bikes!  In fact, 82% of registered vehicles are motor bikes.)  Forget the Highway Code; giving way is approached rather differently.  It’s more fluid and forgiving, road rage is non-existent even if you venture into “their” space. But they all seem to rub along and it works.  You do hear horror stories but in the short time I was out there I did not see one accident.

We spent a day and half the night doing motocross type biking through the Borneo jungle.  I call it biking, but I seem to have spent more time off the bike than on it.  And having had minimal previous experience on 2 wheels I was particularly ill-equipped for the, at times, 12 inch deep, slimy rutted and treacherous tracks. 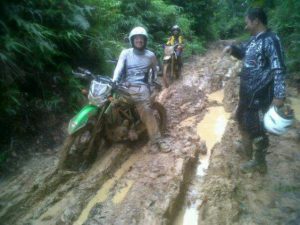 Outside comfort zone it certainly was!

And we also lived the way the majority of Indonesians live. It tends to be very cramped/crowded with minimal sanitary or washing facilities – certainly nothing like what we have over here. Wiping parts of your anatomy after abluting is done with water only from a beaker (and no loo paper), using your left hand.

And then there is eating – which is usually done with your hands. Well, your right hand … for obvious reasons.

Since things seem slowed right down in Indonesia it gives one time to reflect on the business or commercial side. I am no expert but business over there is totally different to what I am used to. First, there is scant regard for “‘elf and safety” – have a look at this picture. 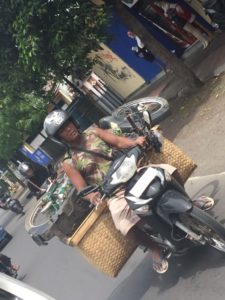 Imagine getting away with this in the UK.  In fact, seeing a family of 4 (and once we saw 5) on one bike is not unusual.

Did anyone see a recent Police Interceptors program – a Chinese guy riding a moped in Doncaster with his 2 young children (none wearing helmets) on board?  Speaking no English, no licence, no insurance he was pulled over, bike confiscated – fine of £650. The poor chap (through an interpreter) said that is what they did at home in China; and I can see his point – certainly in Indonesia it is the norm.  At least he had “L” plates on!

Progress anywhere is also painfully slow – a combination of far too many people wanting to be somewhere else at the same time and poor roads.  Not a problem if you plan ahead and it does give you time to soak up what is going on (or more specifically what is not going on) around you.

Which brings me to the res, the crux of the matter and the point at issue:

Over here when starting a business the books will tell you to identify a need, identify customers, promote and deliver it cheaper than anyone else or be very differentiated – and you might, just might, have a business which survives more than 12 months.

The roadsides and markets in Indonesia are crammed with stalls, businesses and ad hoc traders who are selling identical stuff side by side at similar prices – yes, you can and should always negotiate!

Where is the cost leadership or differentiation there??  But they seem to scrape by somehow.   And to a person they were all incredibly happy and lovely people to be with.

So my message is this.  That time allowed me to reflect partly how fortunate we are to be living wherever we do in the UK.  But also that we must remember that other less developed countries do not necessarily have it wrong – it is just done differently.

If I was restricted to one learning point only, it would be this:

Contrive every now and then to force yourself outside your comfort zone.  I have just come back from well outside mine … and survived.  Better than that, it has given me a totally different perspective on things.

You should try it too …

Posted in People and Leadership.